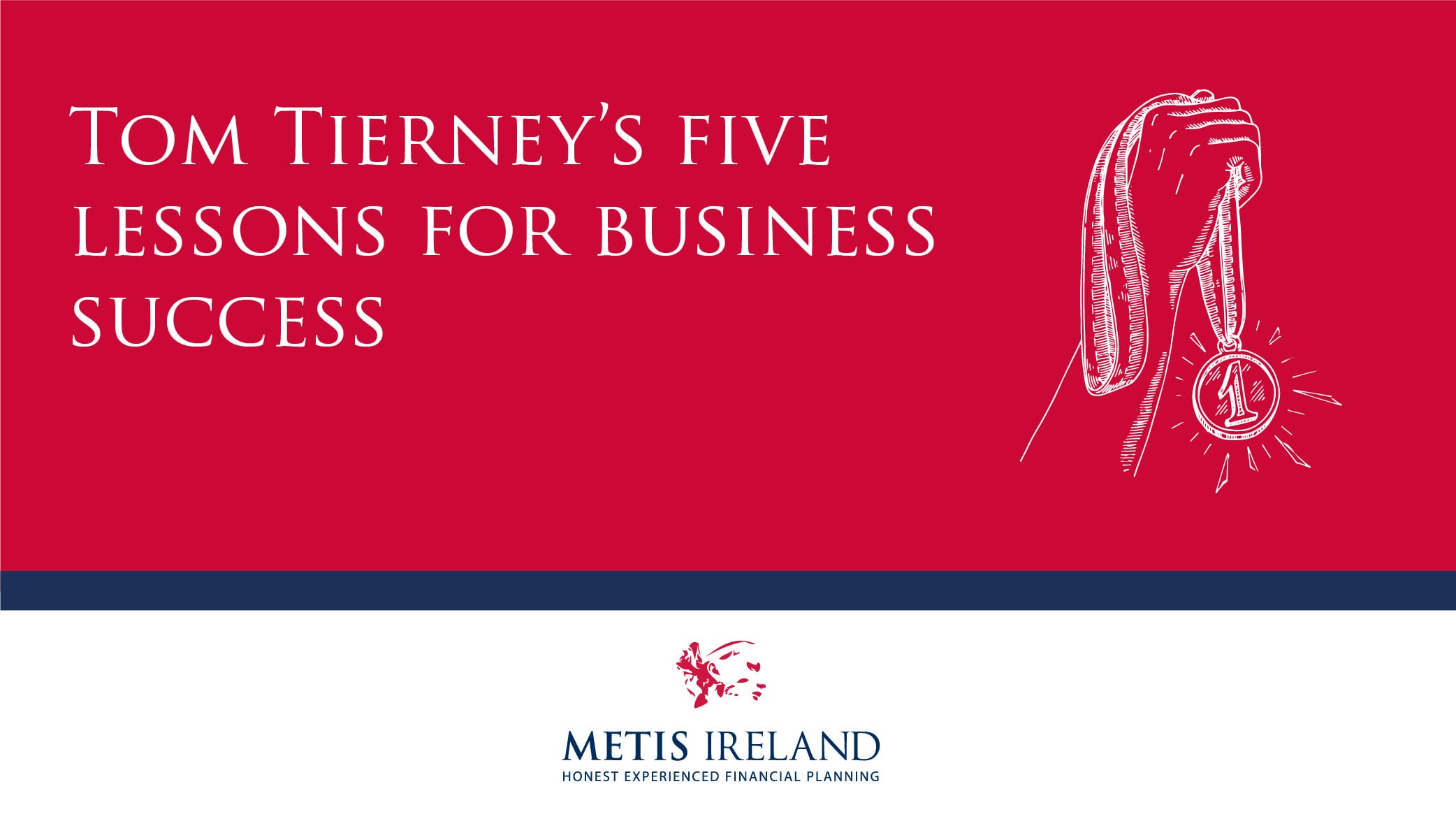 In our recent virtual coffee meet we heard Tom Tierney’s fascinating story from a lifetime in business.

Ouch, the Balance Sheet net worth is only €3.0m! Reeling from the call you shake yourself down, put on the game face and walk out into the office to discover your opposition has email bombed your staff, clients and shareholders to tell them the news.

You’re Tom Tierney, CFO of Lifes2good, and a case your company brought for a breach of a distribution agreement has been ruled against you.

Fast forward to January 2017. You’re in the office and your banker calls you to let you know the check is in from the sale of the major part of the same business. Eight years prior you were almost €14 million in the red; now you’re €150 million in the black.

You’re Tom Tierney, and you’ve just sold Viviscal (with €50 million in Revenues) to Church & Dwight (a US Fortune 500 company) for €150 million.

The world’s most high-stakes rollercoaster

You’ve almost definitely heard some iteration of the phrase ‘business is a rollercoaster’ in the past, but there’s a great reason for that. The highs can be stratospheric, and the lows can feel six feet under.

Many business owners will have had their own April 2009 moment – you’ll recognise that sinking feeling where it feels like the jig is up and there’s no clawing out of the hole. But they will also have had their own 2012 moment – the turning point when Tom and Viviscal won their appeal against the initial ruling – and their own January 2017 moment, when they sold the business at a €50 million turnover for €150 million.

At our latest Virtual Coffee Meet Tom Tierney shared with us the five key lessons that he’s learned from the whirlwind ride that has been his career.

Tom says, “when I first heard this I said what the hell is this?! This is another one of these Americanisms. But when you actually delve into it, it is so, so true.”

Your people are the ones who get things done and help to move the business on. No matter what business you have or how good it is, if you haven’t got the right people, or you’ve got the wrong people, you’ve got a serious challenge. It’s all about people. Tom emphasised that the amount of time and effort they put into their people at Viviscal was a key driver in the success of the business. Not only that, but it created loyalty and trust going forward. The dedication, commitment and talent that the people in his team brought gave Tom a great sense of pride.

“When we sold the business, it was privately owned. There was an investment fund involved, and there were four of us as equity shareholders. But, we wouldn’t have got here without the whole team. At that stage we were at 150 people spread across the world – everybody in the organisation benefited financially from us selling the business. And I think that was really important and it left a very positive reaction with the people.”

Lesson two is a big one that we’re sure all owner-managers are guilty of; so much of your time is spent in the nuts and bolts of the day-to-day running that it’s easy to lose sight of the overall steer. It’s critical to spend time working on the business if you want to have any success or growth.

“It’s important to have someone at the top asking ‘where is this business going?’” Tom says. “In every business there are challenges every day that demand your attention, but you need that overall plan and direction.” When they had their April 2009 moment, it was having plans in place to fall back on that ultimately paved the way for success. We know all about the importance of having a business plan, but it’s equally important to have a plan for the business. That may sound like the same thing, but it isn’t.

Tom says, “You need to start with asking ‘What’s our target, where do we want to go? What do we need to do to get there?’ And then it’s all about making it happen underneath. If you don’t have a plan, you don’t know where you’re going or if you’re achieving what you want.”

Okay okay, we know, nobody wants or sets out to fail. But the likelihood is, you will at least once. Nobody gets it right every single time. It’s fine to fail – that’s how we learn and grow – but the key is to notice and catch those failures fast. Fail fast, fail early, shut it down before it becomes a more serious problem. The challenge is to get more things right than you get wrong.

Tom cited an example from his Viviscal days. “Turkey was a potential market we identified. We did all this research, it had all the criteria, everything you wanted. So we said, fine, let’s go and do it. We put half a million into a test stage. But within three months of getting our feet on the ground there, we shut it down. It just wasn’t going to work.”

“That sounds like a bold thing to do with the financial investment we had made, but we spotted that it would be a failure and were able to stand up and say ‘no, this will be a quagmire, let’s intervene early.’ We had to figure it out pretty fast because it would have impacted on what we wanted to do with the overall plan.”

Lesson four: The shadow of a leader

As a leader what you have to realise is that no matter what you say, your actions will always speak louder. People watch what you do.

For Tom at Viviscal, understanding the importance of leading by example meant that their people got what they saw. When times got tough for the business their people went with them, because they were just as transparent and conscious of their visible actions in good times as in bad.

“When you have an energy like that in an organisation, when the going gets tough everybody pulls up their sleeves and gets stuck in,” Tom mused. “That kind of ‘can-do’ attitude becomes universal in the company, but only because it was first seen from the top dogs. We had to walk the talk. The importance of that often gets lost on people, but it really is key.”

Lesson five: It’s the journey, not the destination

The fifth thing is another common saying, but it’s common because it’s true. It’s not always about a destination – it’s the journey that counts. When the €150 million came in from the sale of the business, Tom says it was somewhat of an anticlimax. The sale and the money was great, but the satisfaction came in the lead up to that.

Tom explains, “In August 2016 we did a series of management presentations to Fortune 500 companies in the Chrysler Building in New York City. These are big names that you read about in Newsweek, and they were grilling us. We took the grilling and also gave it back to them. Then they went away and came back a month later having upped their offer. That’s serious satisfaction. You can’t buy that.”

It’s fulfilling the plan that holds the satisfaction. Tom and his team’s plan was to take the business to a 50 million turnover and then sell it, and that’s precisely what they did. It wasn’t without its challenges, or its ups and down. And it wasn’t without its share of luck.

“You get lucky breaks along the way, but it was hard work,” Tom reflected. “It was about perseverance and commitment. And of course, personal sacrifice. It’s about that kind of commitment and that kind of intensity. But equally, you can’t be intense forever. You’ve got to actually step out, take a breather and go back in.”

There’s nothing in these lessons that’s unique to any specific business. All businesses have their own unique products or services or customers, but what makes it work and what makes it happen is common to everyone. It’s about attitude and leadership and the desire to achieve, but equally about knowing when it’s not working, when to get out of it and go to plan B.

“There were some great ups and downs,” Tom said. “It was a great experience. But I’d have to say it was about the people that we had. We had a brilliant bunch of people, and we had a plan. That was a key thing. The plan was there, it was moved, it was changed, it was adjusted. But the important thing was that we had one.”