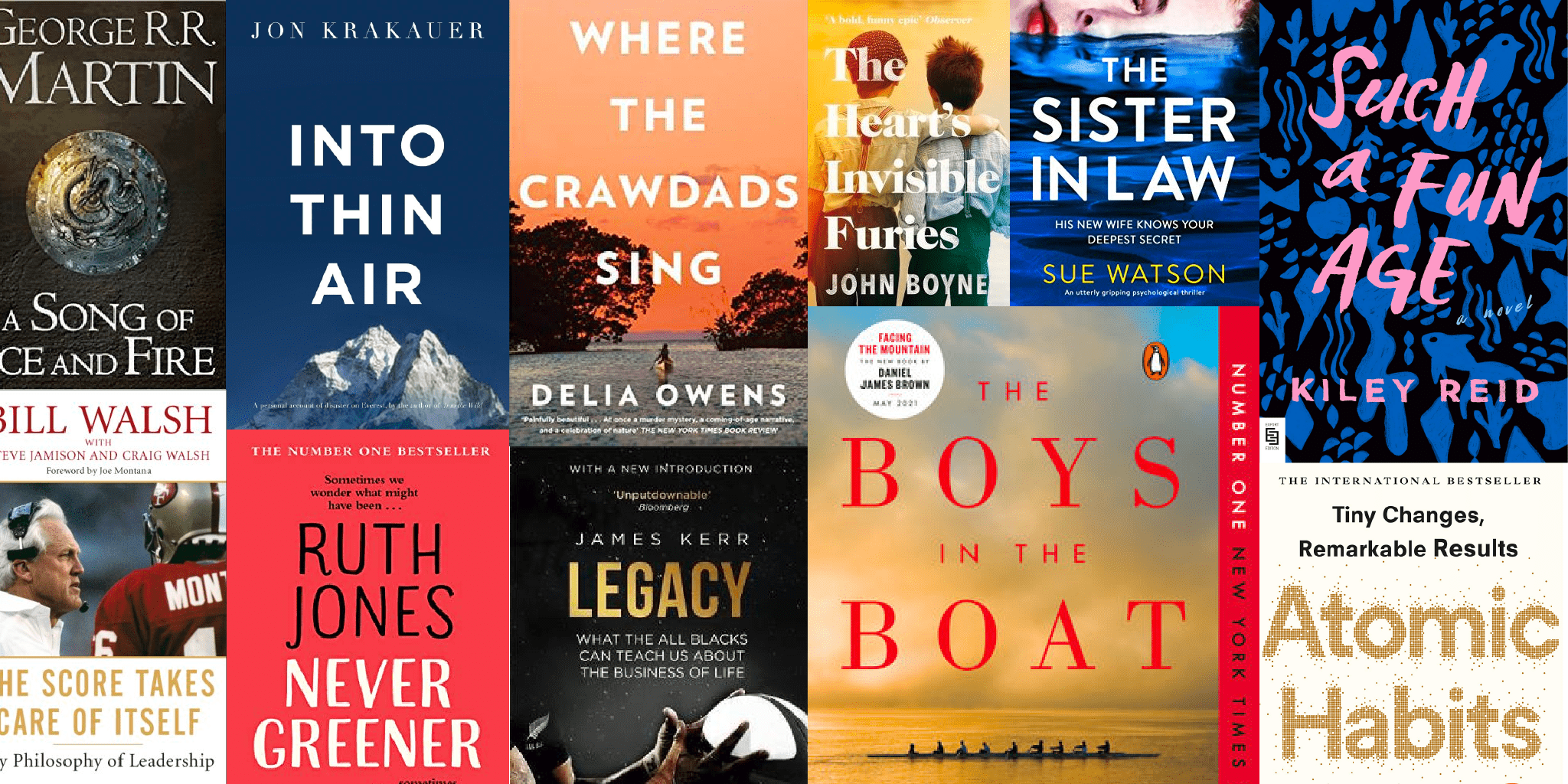 Have we ever mentioned how much we love reading? There’s just nothing better than sticking your nose in a good book and immersing yourself in another world for an hour or so, or coming away feeling inspired and like your brain might burst from all the game-changing insight you’ve gained.

So when we asked the team what their favourite books are, in honour of World Book Day, they delivered in spades.

Here are some of our favourite reads.

Into Thin Air, by John Krakauer

This is a true story about the 1996 Everest climbing disaster; how it happened and what should have been done differently. It’s a great insight into how pressure affects people and impacts their leadership skills. Fantastic stuff.

The Boys in the Boat, by Daniel James Brown

This one is another true story. It’s about the American Olympic rowing team from Washington State for the 1936 Berlin Olympics, and is a great coming-of-age story. The different characters and personalities involved are fascinating, and it was just such a unique point in history for both the US and Germany.

A Song of Ice and Fire, by George RR Martin

You might know it better as Game of Thrones after the TV adaptation, but this is the title for the book series. In my opinion it’s the perfect balance of fantasy, mystery, strategy and human nature. Also, Tyrion Lannister is pretty damn funny.

This is the story of the team culture that has made the All Blacks such a force in Rugby Union. A brilliant book that has easily transferable lessons for creating a great team culture in business.

This is a personal development one, and I swear by it. It’s very easy to read and implement, and is full of ideas to make small changes that will revolutionise your life and make you more effective in everything you do. I can’t recommend it enough.

The book I read recently is The Heart’s Invisible Furies by John Boyne. It is a book I didn’t want to put down and goes through so many emotions: laughter, sadness and anger.

Cyril brings you through his life from his mother’s pregnancy out of wedlock in rural Ireland to his life with his adoptive parents and ending with a ghost friend telling him of his own death with many other topics in between. I absolutely loved it.

My absolute favourites are Never Greener by Ruth Jones, and The Sister in Law by Sue Watson. I always come back to them and they’re really gripping stories.

I have always been a complete book addict, and would easily get through a couple of books a week and I have been known to shut myself away and refuse invitations because I just have to finish what I am reading!

But over the last few years, I have really struggled to read. I blame it on a mix of social media and Netflix ruining my attention span, and the feeling of guilt if I was reading for fun instead of studying. So when I do read, I normally reach for something I know I will enjoy, something easy where I already know the characters. It was always comforting slipping back into a narrative I know so well.

But last year, with Lockdown and finishing a degree, I made the effort to get back to reading a more varied selection. Some of the books I really enjoyed were Such a Fun Age by Kiley Reid, An American Marriage by Tayari Jones and Rodham by Curtis Sittenfeld. But my absolute favourite by far was:

Where the Crawdads Sing, by Delia Owens

The story is about a young girl Kya Clark who is abandoned by her family and survives alone outside a quiet fishing village. It is such a beautiful story and paints such vivid pictures of the world she inhabits. It follows her through life leading up to a court case and beyond. I don’t want to give too much away, but it is an amazing story about isolation, wanting to belong, survival and strength. I highly recommend it.

The Score Takes Care of Itself: My Philosophy of Leadership, by Bill Walsh

I am a big fan of all types of sport, and in particular American Football. The great Bill Walsh is someone who I admire hugely, particularly for his work in guiding the San Francisco 49ers to three Superbowl victories.

The book provided a fascinating insight into his creative genius as Bill documents his philosophy on effective leadership and how to get the most out of a team in different circumstances.

The main take away from me was the standards of performance which Bill set himself and others rowed in behind him. Bill changed the culture of the 49ers through his tireless devotion to his own standards of performance. From the manner in which he dressed, to how he answered the phone, to how he communicated with his players. All these small actions helped develop a culture of excellence within the organisation. As Bill says himself, “the culture precedes positive results”.

Another standout for me from the book was his obsession with the process and getting to where he and the team needed to get to via a methodical, step by step approach. It taught me that if you stick to the process and tick the boxes along the journey, you will get to your desired outcome.

The book has lots of nuggets that I have taken and used today in my day-to-day role at Metis Ireland, as well as my football career with Dublin GAA.

Do you have a favourite book that you’d like to recommend? Have you read any of our recommendations above? What did you think? We’d love to know!