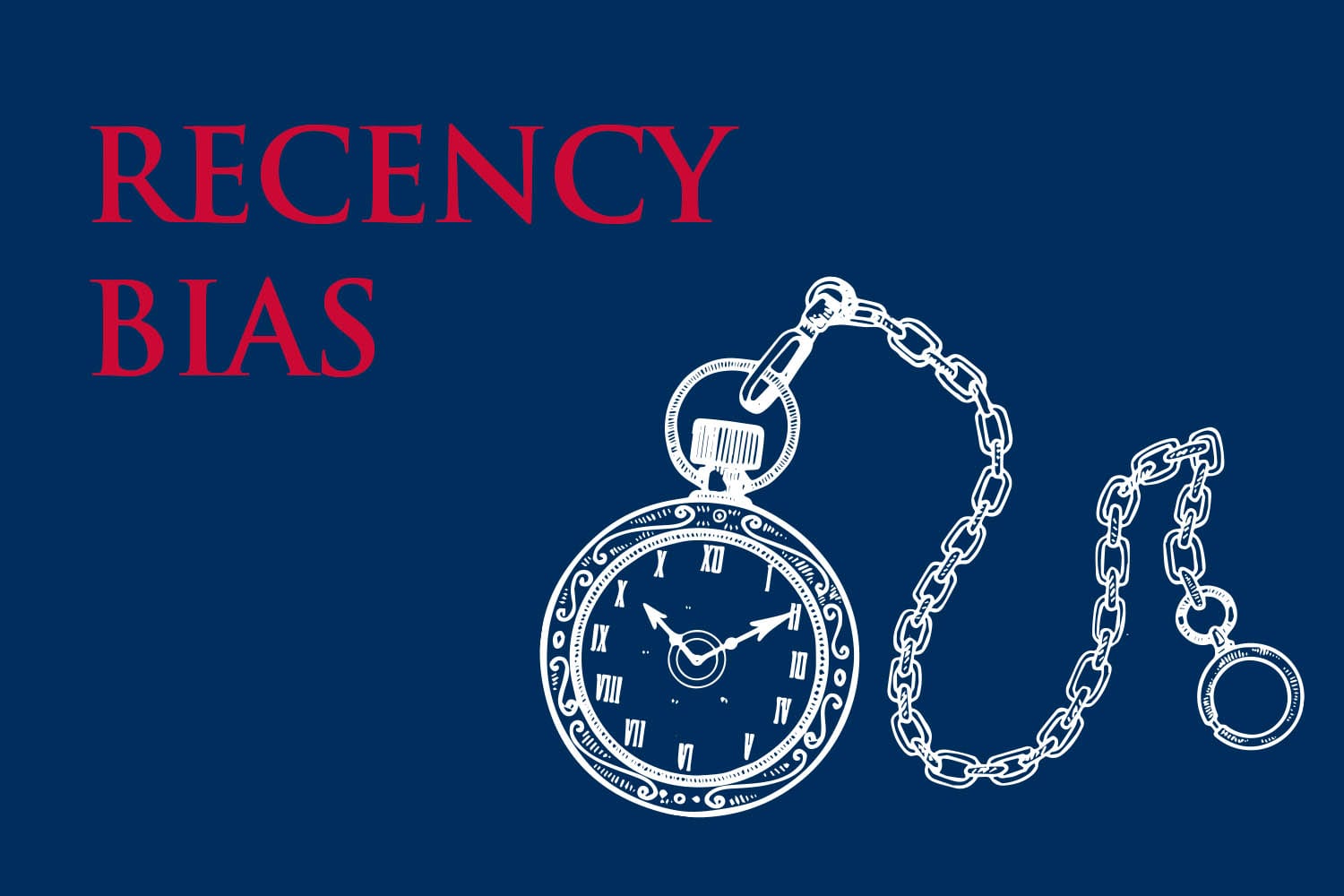 ‘You’re only as good as your last performance’… not strictly true. Even if you fluffed whatever you do for a living on your last outing, that’s no reason to use it as a yardstick for your ability. Equally, if you smashed it, but had a run of average performances before that, your latest experience isn’t necessarily the best predictor of future performance.

And yet as humans, we’re remarkably quick to forget the past and surprisingly willing to stake the future on more recent experiences. It’s called ‘recency bias’. As we approach the last few behavioural biases in our series, you might be remembering how great the recent entries have been, but less able to recall the earlier ones.

Not only is that a good reason to read them again sometime, it’s recency bias in action.

Recency bias is a human quirk that causes us to pay more attention to our most recent experiences, and to downplay the significance of long-term conditions. For example, in ‘Nudge’, Richard Thaler and Cass Sunstein observe, “If floods have not occurred in the immediate past, people who live on floodplains are far less likely to purchase insurance.”

That’s recency – tricking people into ascribing more importance to the lack of recent flooding than to the bigger context of being located on a floodplain. In 1905, San Francisco was a great place to live. In spring 1906, not so much. Ask a resident that summer about their choice of city and they might not be enthusiastic, but just three years later the city was rebuilt. Today, San Francisco is home to almost one million people, all very well aware that earthquakes can and will happen… just not recently.

Recency bias is helpful in two ways. First, it stops us from trying to use our entire life experience to make decisions. If we had to choose between menu A and menu B by drawing on every experience of eating lunch across our entire lives, we’d go mad, or starve. It’s a way of thinking “well, what happened recently when I encountered something similar?”

Secondly, it can give us important context. In ‘Stumbling on Happiness’ Daniel Gilbert describes how we humans employ recency to accurately interpret otherwise ambiguous situations. Say, for example, someone says to you, “Don’t run into the bank!” Whether your most recent experience has been floating down a river or driving toward the commerce district helps you quickly decide whether to paddle harder or walk more carefully through the door.

The problem with recency bias is that it makes us focus on an isolated recent example, rather than taking a look at the bigger picture, and while it’s not always the case, that can serve to badly skew our perception of what’s likely to happen and lead us into poor investment decisions. Buying high and selling low is exactly the opposite of investors’ actual aspirations. And yet, no matter how many times our capital markets have moved through their bear and bull cycles, recency causes droves of investors to stumble every time.

By reacting to the most recent jolts instead of remaining positioned as planned for long-term expected growth, they end up piling into high-priced hot holdings and locking in losses by selling low during the downturns. They allow recency to get the better of them and their rational, evidence-based investment decisions. In the 1990s the dotcom bubble happened because people assumed it would just keep on growing. Of course, it didn’t. Conversely, after the crash of 2008, people assumed the markets would keep hitting new lows, panicked and threw the baby out with the bathwater.

Recency bias can help us to get through life, but investing demands close attention to the bigger picture and the longer term.