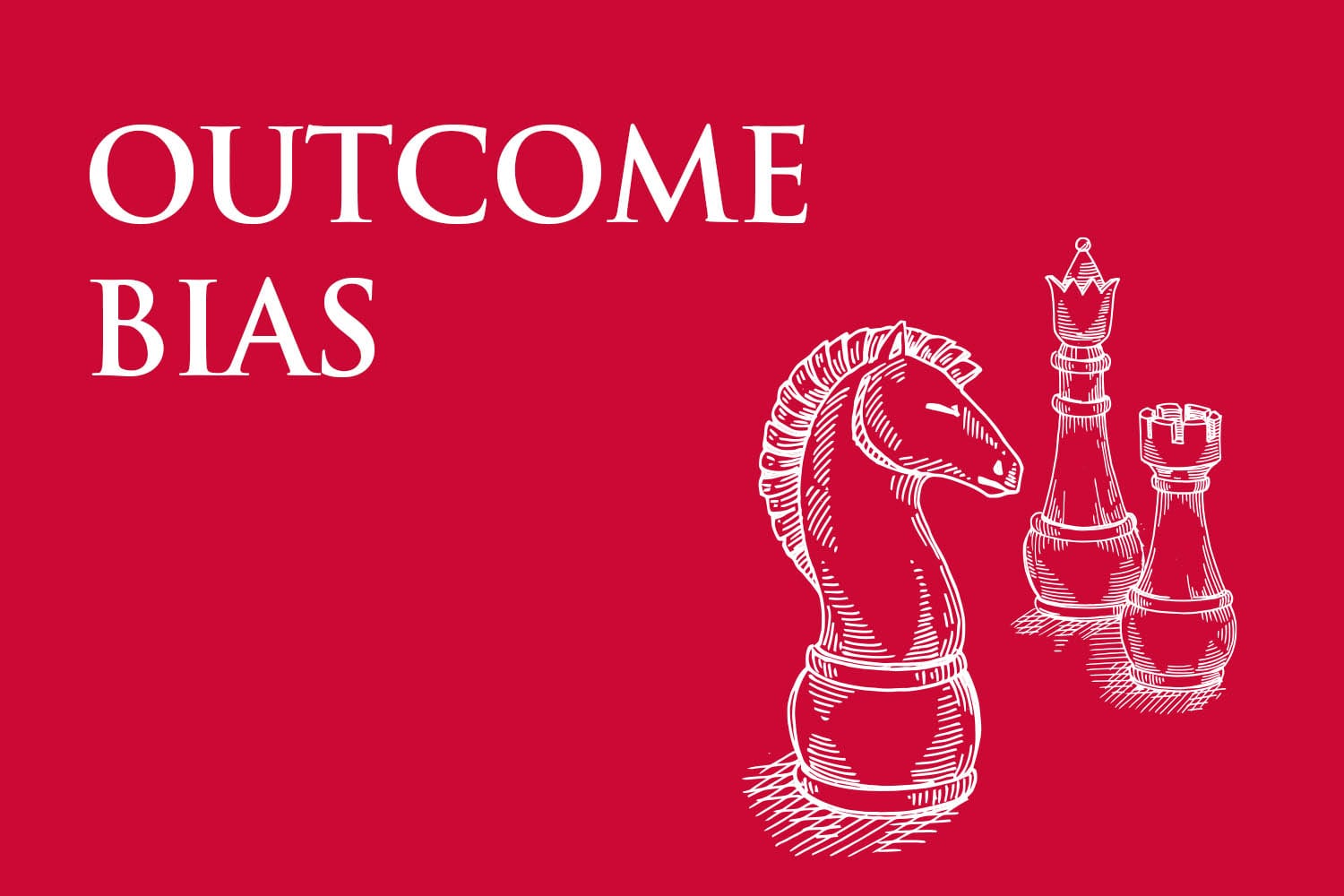 Feeling lucky? On a bit of a roll? Well, good for you.

There’s absolutely nothing wrong with feeling upbeat about your prospects. You might win the lottery. You might get that job that seems like a bit of a stretch. You might get the crisp packet that’s hiding a tenner inside, and as long as you understand that your ‘luck’ is exactly that, no problem.

But humans manage to create problems one way or another. If you begin to confuse random events with accurate predictions, you’re allowing one of our most destructive behavioural biases to get its foot in the door. This is outcome bias – the one that pats us on the back when we get five ‘heads or tails’ in a row right, and then deserts us when the sixth goes the wrong way.

‘You make your own luck’

Let’s get that out of the way first. Sometimes, good or bad outcomes are the result of good or bad decisions, that’s true. But to accurately predict something, it needs to be predictable. That’s not a word that applies to the markets and if you’re in a position where you’ve tried to forecast future market movements, and they’ve gone the way you predicted, hard as it may be to swallow, that’s just random luck.

You don’t make luck and you can’t get good at luck. Luck, whether it’s good or bad, just happens. The real danger, the outcome bias, is when you mistake that luck for skill. That’s when you look at what you predicted, look at what happened, assume it’s a case of cause and effect and then apply the same logic in future.

Throughout this series, we’ve tried to give every behavioural bias we’ve covered the benefit of the doubt. In most cases, they are instincts that in one way or another help us to survive being alive, whether it’s running away from danger or screening out distractions and noise. But outcome bias is just a bad apple and it may be the one bias that’s never really helpful in the long run. If you’ve just experienced good or bad luck rather than made a good or bad decision, when wouldn’t you want to know the difference so you can live and learn?

As Daniel Kahneman describes in Thinking, Fast and Slow, outcome bias “makes it almost impossible to evaluate a decision properly – in terms of the beliefs that were reasonable when the decision was made”. It causes us to be overly critical of sound decisions if the results happen to disappoint, which can close our eyes to opportunities in the future. Conversely, it generates a ‘halo effect’, assigning undeserved credit “to irresponsible risk seekers … who took a crazy gamble and won.”

That kind of thinking can lead to disastrous consequences if an investor tries the same thing again and loses money, or worse, they keep on doing the same thing over and over on the assumption that their luck will come around again.

In short, especially when it’s paired with hindsight bias – the human tendency to pat ourselves on the back for ‘knowing it all along’ even if we actually predicted the opposite – this is dangerous stuff in largely efficient markets. The more an individual happens to come out ahead on lucky bets, the more they may mistakenly believe there’s more than just luck at play.

If you’re feeling lucky when it comes to investments, we’d suggest you feel focussed instead. Rather than trying to play the market, the really sensible approach to investment is to work with a professional financial planner. They’ll help you to set out a long-term investment plan that’s tailored to meeting your goals.